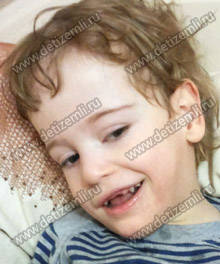 The child was born prematurely at 32 weeks of pregnancy. He was transferred to ICU where he spent 7 days on the ventilator. On the third day of his life he suffered hemorrhage in his brain and later developed hydrocephalus. In a month and a half he had surgery (got a shunt). This is how the life of little Robert began. Currenrtly the boy must be treated at the center for speech pathology. Treatment costs 70,000 rubles. Help the child!

Paid for treatment of Robert worth 70,000 rubles.

Collected donations for treatment of Robert

Charitable Foundation for children "Children of Earth" has collected donations for Robert Barseghyan. We would like to thank Tatiana Melanova for her help in collecting donations.

Charitable Foundation for children «Children of Earth» begins collecting donations to pay for treatment of Robert Barseghyan in the center of speech pathology. The treatment costs 70,000 rubles. All information about a sick child on his personal page.