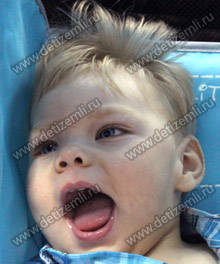 The pregnancy progressed without anomaly, but the birth was very difficult. A beautiful boy was born. The doctor advised to immediately contact a neurologist which the parents did. The first shock was a diagmosis of motor disorder as a consequence of  CNS injury. Then, even worse problems have been found. The boy has been in treatment from birth, and currently he needs to undergo therapy in the centre of speech pathology which costs 70,000 rubles. Help a sick child!

Moscow Charitable Foundation for children «Children of Earth» finishes the collection of donations for Maxim Krivoshein. The treatment bill has been paid. Thank you all!

Charitable Foundation «Children of Earth» begins collecting donations to pay for treatment of Maxim. The boy needs to undergo treatment at the center for speech pathology which costs 70,000 rubles. Help a sick child!