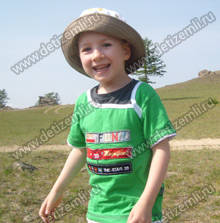 The boy was born healthy at 39 weeks. By the age of three months he began to hold his head. At six months he began to sit, and at eight months, stand. Then the diagnosis came. Blagomir is 5 years old. He does not talk. This disturbs him because adults do not understand him. He likes playing with cars and jigsaw puzzles. In order for him to have a chance at recovery he needs a long and costly treatment. Blagomir is currently waiting for rehabilitation at Reatsentr LLC. The cost of treatment is 74,000 rubles. It’s in our power to help him!

Charitable Foundation for Children «Children of Earth» (Moscow) wishes to thank all the sponsors who helped in collecting donations for Blagomir. Funds have been collected, and treatment will be paid for in the near future. We wish Blagomir success and recovery.

Charitable Foundation for Children «Children of Earth» begins collecting donations for treatment of Blagomir Ledetsky. Treatment costs 74,000 rubles. The child has epileptic encephalopathy. He does not speak, and lags behind his peers in development. Help him win over his disease!