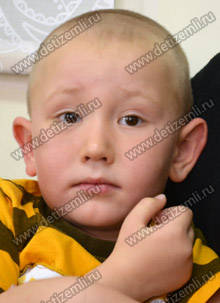 By the age of three Artem became unsociable, lost interest in intellectual activities, began to talk less. His behavior changed, with many repetitive movements, abnormal reactions to sounds, fear of strangers and other fears. The child requires treatment in «Reatsentr» (Izhevsk) which costs 96,000 rubles. Help the child!

Paid 96,000 rubles for treatment in Reatsentr.

Paid for treatment of Artem Nevostruev

Moscow Charitable Foundation for Children «Children of Earth» closes the collection of donations to pay for treatment of Artem. The funds have been raised. Special thanks to our old friend Vitaly who helped pay for the child’s treatment. We wish Artem success in treatment.