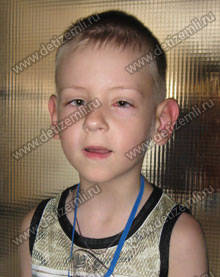 Fyodor became sick immediately after his birth. At four months his mother noted that the child couldn’t see. After the MRI it became clear that there was brain damage to the part responsible for vision. The cause was viral encephalitis. Fyodor needs a special examination in an Israeli clinic which will then prescribe the correct treatment and help the child to see the world. The survey is only 1020 dollars. Help the child cope with his terrible disease!

Foundation for sick children, «Children of Earth» ends the collection of charitable donations for Fedor Nikolaev. The boy has a problem with his vision. Fedor needs to be examined in order to choose the right treatment. Thank you for your help in collecting donations.

Charitable Foundation for Children «Children of Earth» begins collecting charitable donations for the examination of Fyodor Nikolaev. The boy has atrophy of the optic nerve. He urgently needs treatment. Help the child!