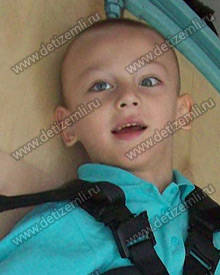 Grisha is now 10 but he does not walk, can’t sit upright, barely holds his head and does not talk. The birth was difficult. The child suffered prolonged asphyxia (lack of oxygen). Despite all the problems, Grisha is a cheerful and active kid. His mother is confident that they will be able to put him on his feet. The boy urgently needs treatment in Reatsentr which costs 121,200 rubles. Help Grisha get better!

Charitable Foundation for children «Children of Earth» finishes the collection of donations to pay for treatment of Grisha Novikov. We thank all the donors who helped the sick child. Grisha’s treatment will be paid in the near future.

Moscow charitable Foundation for children «Children of Earth» begins collecting donations for the treatment of Grisha Novikov. The cost of treatment is 121,200 rubles. Please respond and help a sick child. Grisha is a very cheerful child, he wants to be able to play and move around more, but can’t because of his terrible disease. It is in our power to help the sick child!