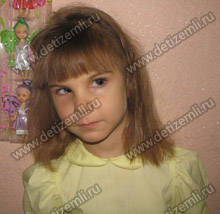 Nastya has several serious diseases since birth. Now educating girls is engaged She is currently under her grandmother’s care because Nastya’s mother is seriously ill and is being treated for cancer in Moscow. At tge age of four months, an optometrist in a pediatric clinic noticed that the child was not focusing her eyes. After that there were many studies that have shown that the child has glaucoma. She is now in need of treatment in the ’s eye microsurgery clinic. The cost is 49,514 rubles. Please help the child see the world!

Charitable Foundation for sick children «Children of Earth» finishes collecting charitable donations for treatment of Nastya. We were able to quickly raise money. Nastya will now receive necessary treatment at the Fedorov’s clinic. Get well Nastya!

Moscow Foundation for sick children «Children of Earth» asks to respond all of those who care and help little Nastya from Lipetsk see the world. The child has glaucoma. The girl urgently needs clinical treatment.